While watching the much-talked about NBA finals on ABC last week I caught a glimpse of the great Mr. Abe Lincoln sporting his signature facial hair and large black cap -- and yes he looks as sartorially dapper and young as ever -- oops! don't get me wrong (of course I know he's down six feet under) and I am not one delusional fellow either. It turned out it was Benjamin Walker masquerading as Abe for a Tim Burton movie released in the U.S. on June 23. 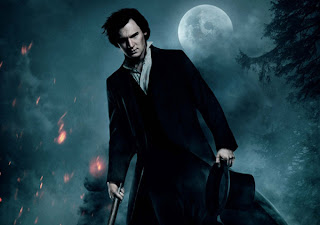 Upon seeing the trailer I was like "Is that a joke? Abe Lincoln an axe-wielding vampire hunter?" And then it occured to me that Abe Lincoln's lifestory indeed has all the ingredientss for a superhero movie -- parental loss, financial hardships, injustice witnessed first-hand -- enough to give Spidey a run for his money.

On a personal note I can only imagine how the scene would look like when he delivers the Gettysburg address in a goth-esque vampire hunter fashion ala Van Helsing. I just hope Walker did his best on this scene convincingly to say the least as it is the crux of Abe's story as the 16th President os the United States.

"Rotten" approval score of 38%, based on 125 reviews. The consensus reads that the film "has visual style to spare, but its overly serious tone doesn't jibe with its decidedly silly central premise, leaving filmgoers with an unfulfilling blend of clashing ingredients." --  Rotten Tomatoes

"Though original, this is a strenuous effort to combine the conventions of two genres." -- Emanuel Levy of EmanuelLevy.com

"What ideally might have been playful and knowing is instead uptight and dreary, with a visual scheme that's so fake and cartoony, it depletes the film of any sense of danger," -- Christy Lemire of Associated Press

"Someone forgot to tell the filmmakers ... that the movie was supposed to be fun. Or at least smart."
Joe Neumaler of New York Daily News

"This insipid mashup of history lesson and monster flick takes itself semi-seriously, which is truly deadly." -- Joe Morgenstern of The Wall Street Journal

"It's too bad someone had to spoil things by making a movie to go with it." -- Manohla Dargis of The New York Times

"The problem with movies based on a single joke is that a single joke is rarely funny enough to sustain the running time of a feature-length film". -- Barbara VanDenburgh from the Arizona Republic

"Abraham Lincoln: Vampire Hunter has heart to spare, and the occasional silvered bayonet to run it through." -- Marc Savlov of the Austin Chronicle

"A stylish slasher of a movie, a monster flick that does its vampires right, if not their real-life counterparts." -- USA Today reviewer Scott Bowles

"The best action movie of the summer. A surprisingly respectful tone toward American values and their most heroic proponent", calling "the battlefield scenes suitably epic" and finally commending leading star Benjamin Walker, "a towering actor who looks like a young Liam Neeson and never stoops to caricature. -- Joe Williams of St. Louis Post-Dispatch